It is with a heavy heart that we share the news that Josh Jensen, the legendary founder of Calera winery, has passed away. In the world of fine wine, Josh Jensen will always be a legend. An innovator and a pioneer, Josh was named the San Francisco Chronicle’s “Winemaker of the Year,” honored as a “Rockstar of Wine” at World of Pinot Noir, and has graced the cover of Wine Spectator. More than just being universally respected by his peers, Josh played a pivotal role in establishing Pinot Noir as one of North America’s great varietal wines. In doing so, he also built Calera into one of the world’s most revered wineries. Beloved by connoisseurs, Calera has been honored by Wine & Spirits as one of the “Top 100 Wineries in the World” four times, with Robert Parker calling Calera “California’s Romanée-Conti.” 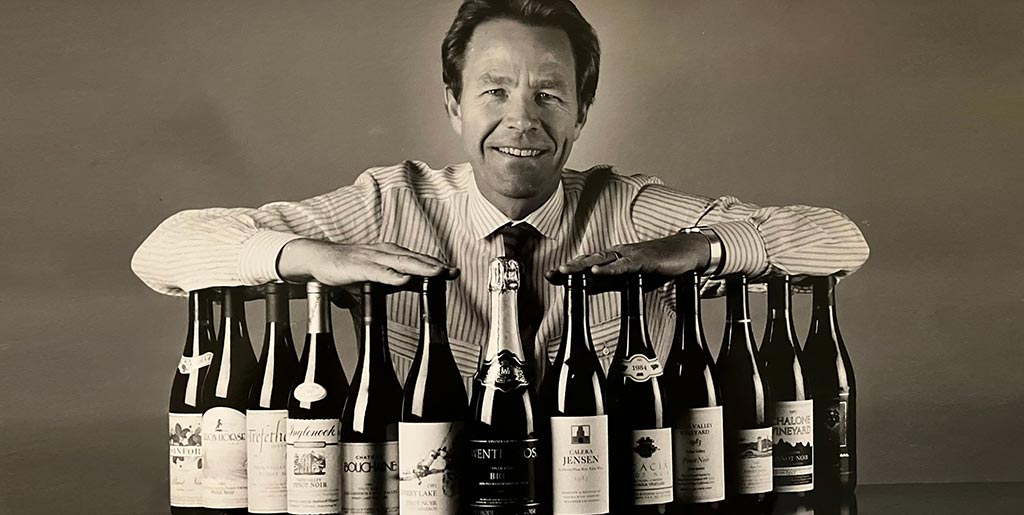 For those who know Josh’s story, there is a particular aptness in the compassion to Romanée-Conti, In the early 1970s, after studying at Yale and Oxford, Josh was exploring Europe, when a desire to try his hand at vineyard work led him to Romanée-Conti, where he worked harvest. Inspired by his experience at the famed Pinot Noir estate, the following year he deepened his understanding of great Pinot Noir at Domaine Dujac.

Returning to the United States, he began a quest to create a style of Pinot Noir that had not previously been realized in the United States. To achieve this goal, he spent the next two years searching for land rich in limestone, like the vineyards he most admired in Burgundy. In 1974, he found what he was looking for on the steep slopes of Mount Harlan, a 3,278-foot peak in the Gavilan Mountains that divide Monterey and San Benito counties. The following year, while living in a trailer on the remote property with his wife and small child, Josh founded Calera, the Spanish world for “limekiln.” There, with no paved road, electricity or phone, he began planting his first three estate vineyards: Jensen, Reed and Selleck.

In 1978, these vineyards yielded their first small crop, resulting in Calera’s debut trio of vineyard-designate Pinot Noirs. For wine enthusiasts, Josh’s early Pinot Noirs were a revelation, offering a new level of structure and sophistication in New World Pinot Noir. In the years that followed, Josh established his own Calera Pinot Noir clone, and planted three more small vineyards on Mt. Harlan: Mills, de Villiers and Ryan, as well as small blocks of Chardonnay, Viognier and Aligoté. Josh also began working with some of the top vineyards on California’s majestic Central Coast to make Calera’s Central Coast wines, which include Pinot Noir, Chardonnay, Viognier and a Vin Gris of Pinot Noir. Believing in the uniqueness of Mt. Harlan, Josh also worked to establish a Mt. Harlan American Viticultural Area (AVA), which he achieved in 1990. As a result, like Domaine Romanée-Conti, Calera is one of the only wineries in the world, and one of only two in North America, with its own AVA.

Throughout it all, Josh followed his own uncompromising vision, never chasing trends, and always striving for the extraordinary. Because of this, Calera’s wines are venerated by collectors for their purity and elegance, each one a liquid study in terroir. Through his innovation and leadership, he helped to redraw the map of California wine, earning the Central Coast accolades as one of the world’s great cool-climate wine regions. While doing so, he also catapulted America Pinot Noir into conversations about the North America’s greatest wines, and by doing so helped to lay the foundation for the modern Pinot Noir boom.

Josh was one of the most unique and influential figures in the modern American wine industry. For those who understand the story of American Pinot Noir, his contributions cannot be overstated. Through his passion, perseverance, and sheer force of will, he literally helped to carve the foundation for California Pinot Noir into the high slopes of Mt. Harlan. By doing so, he changed the industry forever.

Beyond his immeasurable contributions to the wine industry, Josh will be remembered for his great wit and charm, unique fashion sense, generosity of spirit, and his generosity towards his beloved team at Calera. He lived an exceptional life, achieved extraordinary things, and left an indelible mark.